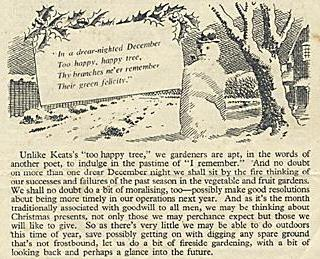 1st - Spent six hours helping out with other allotment association members improve site drainage. Noticed that rodents have been tunnelling into my polytunnel.
2nd - Harvested Swiss Chard, runner beans, flat beans and gherkin today.
3rd - Terrible stormy rain today. Spent several hours in the kitchen baking with ingredients harvested earlier this week.
4th - Heavy rain all day
5th - Heavy rain all day.
6th - Heavy rain all day.
7th - Harvested all the outdoor tomatoes growing in my back garden.
8th
9th
10th
11th
12th
13th
14th
15th
16th
17th - Tied to the kitchen today. Firstly separated a kilo of Mexican tree spinach leaves from their seed heads, these heads being trussed up and hung covered in cotton sacks to collect the seeds as they fall. Used up the large round courgette harvested last month, baked a moist courgette and apple loaf cake using the remaining courgette to create 16 fritters.
18th - Cleared the Mexican tree spinach today as every plant regardless of age and height were going to seed. Harvested over a kilo of Mexican tree spinach and all the apples on my main apple tree today.
19th
20th -
21st - Weighed the apples collected on the 18th, just under 10 kilos which is less than half the weight of last year's harvest. Harvested green beans today and added a large quantity of kitchen waste to the compost heap. Prepared several pelargoniums for overwintering indoors after taking several cuttings. Gathered a quantity of leaves to help create leafmould with. Baked an apple strudel and an apple and raspberry crumble for dessert at the family dinner tonight. Before the dessert the green beans and Mexican tree spinach were eaten as part of the main meal.
22nd
23rd
24th - Rain all day today. Blanched and frozen the green beans harvested earlier this week.
25th
26th
27th
28th
29th
30th
31st
Posted by Mr Cooper at 11:43 No comments:

Links to Mr. Middleton's weekly tasks first:
August 1st WeekAugust 2nd WeekAugust 3rd WeekAugust 4th Week
1st (Sat) - No allotment visit today.
2nd (Sun) -
3rd (Mon) -
4th (Tue) - Visited allotment on my way home from work this morning. Watered the tomatoes on both my neighbours' plots and my own.
5th (Wed) - The 2021 Kings Seeds catalogues arrived at my home. After inserting the order forms in each copy and despite the heavy rain I hobbled up to the Community Shed, on the allotment site. and put them all in there for the association members to browse through at their leisure.
6th (Thur) - Harvested celtuce leaves, a Romaine lettuce, broad beans, a marrow and gherkin.
7th (Fri) - Very hot outdoors today. Watered round at the allotment. Harvested tomatoes, Mexican tree spinach and broad beans.
8th (Sat) - Another very hot day.
9th
10th
11th
12th
13th
14th
15th
16th
17th
18th
19th
20th
21st
22nd
23rd
24th
25th
26th
27th
28th
29th
30th
31st
Posted by Mr Cooper at 13:20 No comments:

1st (Wed) - Both my allotment neighbours are currently shielding from Covid-19 and so I volunteered to tend their plots, which I have been doing for 100 days now. I spent several hours this morning, in the rain, weeding and raking my left-hand neighbour's plot before planting several squash plants on there. On my own plot peas are swelling, cardoons and courgettes are in bloom. At home, the hedges that surround the front garden were pruned. Rose, Paul's Scarlet and Lillies were cut to fill a vase in the living room.
2nd (Thur) - Another rainy day but the apples are growing nicely. The lemon balm and peppermint were trimmed back as they had started to grow wild. I cleared a bed that had previously been occupied with garlic and onions and planted out some sweetcorn and dwarf french bean plants that I had growing in pots. I harvested Mexican Tree Spinach, young leaves for salads and large leaves for steaming. Cleared some more of my left-hand neighbour's plot.
In the kitchen, I transformed 500grams of raspberries harvested on June 30th in to and a further 100grams of raspberries were used to make flapjacks. Better late than never the remainder of my tomato plants were planted the beds of the polytunnel.
3rd (Fri) -  Watered the plants in the polytunnel. The runner beans and broads beans are growing well. Too much rain today to carry out any allotment work.  In the kitchen, I finally used up the strawberries harvested earlier in the week.
4th (Sat) - On approach to my plot, my former association secretary offered me some lettuce plants that he had spare. There turned out to be 17 in total looking rather like Romaine. I planted out 9 of the lettuce plants today, watered the plants in the polytunnel before my wife and I harvested gooseberries, raspberries (gold & red), strawberries and peas. Brought home some of the onions harvested last week as last year's harvest is nearly exhausted.
5th (Sun)  - Harvested rhubarb, gooseberries (red & green), peas, strawberries, raspberries along with onions and shallots.
6th (Mon) - Currently on a staycation this week. Harvested peas today.
7th (Tue)  - Rain all today and no visit took place to the allotment today.
8th (Wed) - TBC
9th (Thur) - TBC
10th (Fri) - TBC
11th (Sat) - No visit to the allotment today.
12th (Sun) - TBC
13th (Mon) - TBC
14th (Tue) - TBC
15th (Wed) - Diagnosed with a meniscal tear in my right knee today after twisting my knee a few days earlier at work.
16th  (Thur) - TBC
17th (Fri) - Harvested peas and raspberries today. Planted out dwarf green bean plants. Pruned both a pear tree and apple tree that showed signs of rust on their leaves. Trimmed Jerusalem Artichokes down to the height of four feet. Emptied the rotating compost bin using the contents as mulch around the base of the raspberries. Trimmed all the comfrey plants and filling up the rotating compost bin again.
18th (Sat) - Non-stop rain all today.
19th -
20th -
21st (Tue) - Visited the allotment today, watered plants but not much else as now struggling to walk due to the injury to my right knee.
22nd  (Wed) - No allotment visit today. Baked a deep filled blackcurrant pie using a kilo of the blackcurrants from last Wednesday's harvest.
23rd (Thur) - No allotment visit today. Baked 2 rhubarb plate pies today.
24th (Fri) - No allotment visit today.
25th (Sat) - First visit to the allotment since Tuesday after the necessity to rest my leg. Harvested broad beans, peas (Ne Plus Utlra & Mangetout), beetroot, marrow, onions and garlic.
26th -
27th -
28th -
29th -
30th -
31st -


May 2020
1st May : Due to the allotment neighbour to the right of my plot shielding from the pandemic I spent the day weeding his plot.
3rd May : The strawberry plants are all in flower including those in the barrels this year. Self-seeded Mexican tree spinach is starting to appear all over the place.
At home in the back garden, the wild garlic is in flower.

It is not that I didn't do anything in March it was more to do with the outbreak of the Covid-19 pandemic. I had been busy getting leases prepared for several local community gardens as well as undertaking clerical work for the local allotment federation and chairing our allotment association's first quarterly meeting of 2020 on March 15th.
Panic buying mania had started in the U.K. in the week commencing March 8th with toilet rolls,pasta and rice being the items that disappeared first from the supermarket shelves. With lock down looking imminent the local allotment community were concerned that access to their allotments might cease and we sought confirmation from the local authority. On March 20th I drew up a list of guidelines and posted them on the noticeboards around the allotment site: The United Kingdom went in to lock down on March 24th and the local authority attached posters on the allotment site gates regarding lock-down and Covid-19.
Posted by Mr Cooper at 18:34 1 comment:

As Britain faces it's first day as an independent nation after leaving the European Union last night after 47 years here are the links to Mr. Middleton's tasks for the month of February
(please note that I have not updated all these tasks at present) : 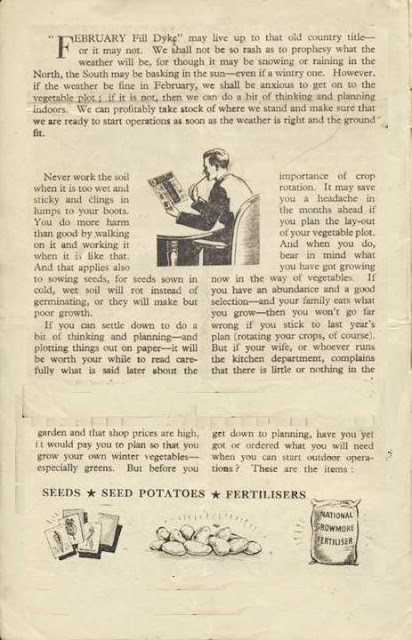 
Below is an excerpt of Mr Middleton's New Year musing back in 1935 : 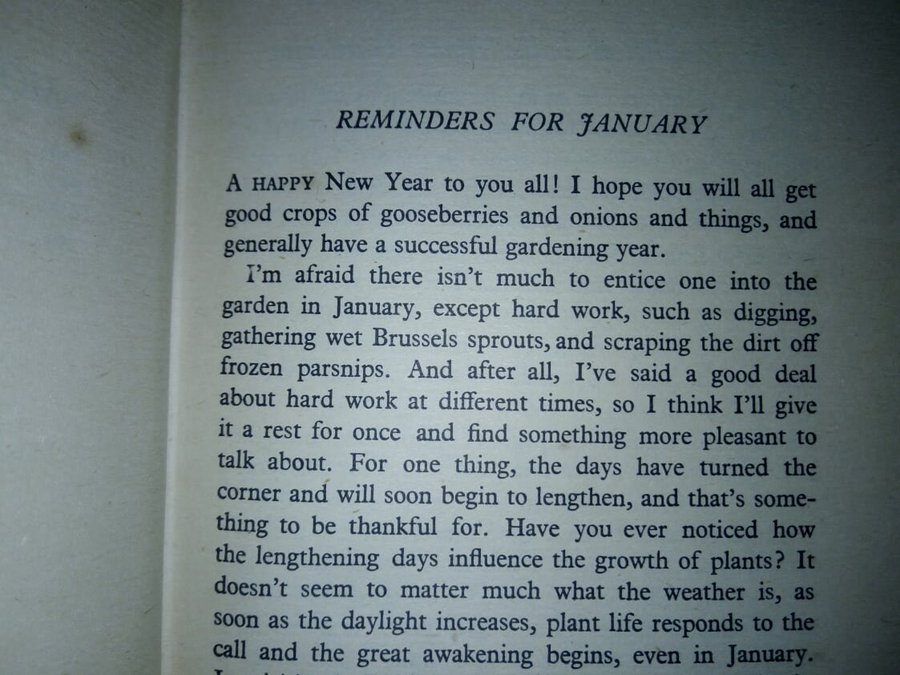