Well today (thursday 29th March 2012) I had popped to the allotment with the sole intention of planting some Sugarsnap Peas I had growing in the dining room at home . Not everything goes to plan!
First I wheelbarrowed some more manure from the plot opposite to cover up the Vales Emerald potatoes as they were growing through quickly . Then Billy arrived and swept my paths before setting up a sprinkler hose with Dave from a plot down the bottom end of the site . Whilst the sprinkler was working away on the dry beds attention was turned to the Apple tree which ended up getting the much needed pruning it required . So with the help of a few new friends plot 44 is starting to look cared for.
Thanks for reading, Paul
Posted by Mr Cooper at 18:17 No comments:

On Sunday 25th March 2012 I purchased 1 Tayberry and 1 Gooseberry sapling which I duly planted in the afternoon up at the top end of the plot where the rest of the fruit appears to be going . Whilst I had the helping hand of my son I decided to transfer the manure I had been offered in to the bed I was preparing for onions . The result of which can be seen in the photograph below. 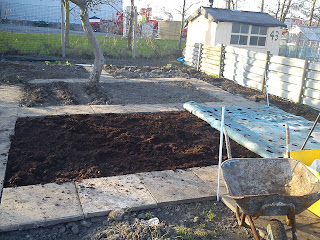 On Monday 26th March I picked up 2 large tubs to be used as water butts on the way home from work . No planting occurred today as it was just a case of getting the butts on the plot . 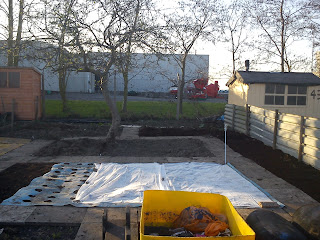 Tuesday 27th March saw me planting a 110 onion sets in to the bed I had been preparing since last week . I also spent time weeding out the bed on the right-hand side and putting manure on that . Gradually the allotment is taking shape and hopefully before May arrives it will be looking more productive indeed.
Thanks for reading, Paul
Posted by Mr Cooper at 10:31 No comments:

Holes For The Onion Sets 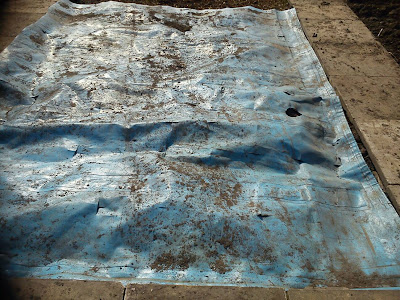 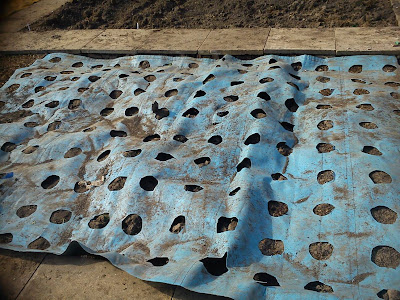 Well the Saturday 24th March saw me pay a brief visit to the allotment as I cut out as many holes as I could in the sheet Billy had given me yesterday . I keep telling myself 'it's getting there' I just hope I can get ahead of myself at some point soon so that it all becomes a pleasure rather than a chore . Still even I couldn't conceive that I would be in the position I am now just a few months ago. Anyway cutting those 140 holes and a small bit of apple tree pruning was all I did today. Thanks for visiting and reading, Paul

Published with Blogger-droid v2.0.4
Posted by Mr Cooper at 02:49 No comments:

I know I've already begun with the potatoes last month when I planted the Vales Emerald but I appear to have amassed so many so quickly that I fear I might not have the space for them all. Today I was only planning to be at the plot for no more than 30 minutes but ended up being there for a hour more. I met Billy who gave me some poles to help build my fruit cage with ( a future project! ) . I also explained that the 120 onion sets I had been given needed planting urgently as they were beginning to take root already.

Anyway cutting a long story short Billy gave me a tarpauline sheet that we roughly marked out with a craft knife for me to later cut out holes for the onion sets. I'd met my neighbours opposite and was offered more free manure with an agreement that come October we would have one load delivered between us as a single load was far too much for a small plot to use in a year. So all in all a productive 90 minutes and I managed to plant my Saxon and Marfona tubers and another Rhubarb root whilst at the plot and begin pruning the apple tree.
It will all get there soon . Thanks for reading, Paul.

Published with Blogger-droid v2.0.4
Posted by Mr Cooper at 11:31 No comments:

Five hours at the allotment and still not sorted.

Well Wednesday 21st March 2012 had been taken up by my re-laying of the paving flags to create a level pathway all around the allotment and of course to get the plot as level as is possible .I still have a further 12 flags to lay and so shall commence that in a moment and complete this post later on. Once I had got the bed that contains the apple tree bordered with level paving I raked the plot over and quickly transplanted the Vales Emerald tubers that I had planted last month to the left-hand side of the bed forming 3 rows . Rome wasn't built in a day and niether will this allotment be. Thanks for reading, Paul
Posted by Mr Cooper at 10:02 No comments:

March Marches On Whilst I Catch Up 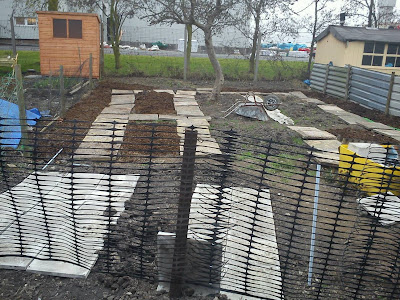 Published with Blogger-droid v2.0.4
Posted by Mr Cooper at 00:04 No comments:

It would seem that I have been a busy bee on the domestic front as well as at the allotment but I have failed to maintain this blog so I shall try and recount all that has been done since my last posting at the start of March.
Posted by Mr Cooper at 03:01 No comments:

I haven't had chance to visit the allotment at the beginning of the week due to decorating commitments at home . On monday night I got a delightful surprise , one of my work colleagues gave me a poly bag containing 112 onion sets that he had spare from his order from Suttons .

I got a touch carried away with myself at the weekend and ordered some seeds from D.T.Brown which arrived on Thursday .

Published with Blogger-droid v2.0.4
Posted by Mr Cooper at 17:01 No comments: