I suppose that the first day of a new month is as good as any to try and kick-start this blog . I have been very busy trying to complete a number of improvements and repairs on the allotment with the hope that this year will see my plot looking tidy and organised again .
I began the day at lunchtime saving some tomato seeds from an Italian Glorioso tomato that I had purchased in the reduced section at Morrisons .

After that I attempted to remove some 'slips' from the Covington Sweet Potato that I had had producing 'slips' and roots since January 1st 2015 . This is very much an experiment for me as I have never succeeded in growing Sweet Potato yet but after reading about others who have managed to grow their own in the U.K. I thought I would give it another go in 2015.

I visited the allotment in the early evening and cleaned 7 grow bags of weeds that had been used last year by a fellow allotmenteer to grow his tomatoes in and he's allowed me to have them for free and in true Geoff Hamilton £2 Garden style I shall be using these to grow salad crops in.

Elsewhere on the plot I emptied the ash from the woodburning stove and put this on the bed that has Turbo Onion sets growing in it and checked on the contents of a compost bin that I had been filling with the domestic kitchen waste since last summer. 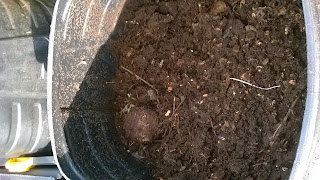