Today started with a pleasant surprise . I received a 2 free "blight busting" Crimson Crush tomato plants from Dobies of Devon which I promptly put in to two plant pots ready to plant out this weekend. 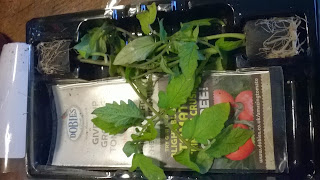 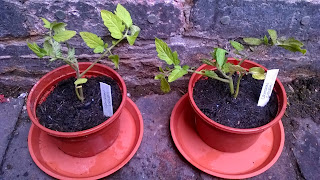 At the allotment I began clearing the paths as I have several projects on the go at once and yet it looks like nothing is completed but hopefully all these projects will be completed around the same time so that I can be proud to show off my plot. One task done whilst undertaking this tidying was attaching a hanging basket containing alpine strawberries that was given to me last year by a neighbouring plot holder to the apple tree .


In the polytunnel I began transferring tomato plants in to their final positions in growbags purchased last month including several of the yellow tomato plants that had grown from seeds saved from tomatoes purchased in Calais at the end of March this year. 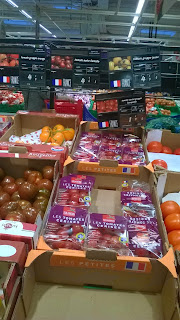 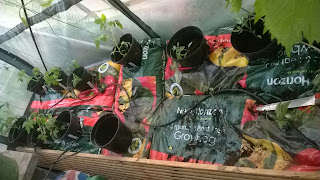 After doing a spot of weeding , adding some cardboard to the compost bin and sweeping paths I harvested 356g of Rhubarb , 103g of Swiss Chard and 7g of mint . The mint and swiss chard were used for dinner whilst the rhubarb occupied the fridge awaiting recipes to experiment with.
Posted by Mr Cooper at 13:52