Collected seeds from a large tiger-striped tomato and a yellow plum tomato. Too late in the year to do anything with but they will store.
Although I do a 'to do' list each month quite often tasks are left undone because of having to deal with pricking out and potting on as and when required. To help deal with everything I have yet again followed the late Geoff Hamilton's advice and I purchased 10 notebooks containing 80 pages ( small enough and thin enough to put in my back pocket) for 99p so that I can make daily observations and deal with tasks in order of importance.
Visited the allotment and added kitchen waste to the rotating compost bin. From the squash seeds sown on May 2nd the following will need potting on this week: Courgettes despite Nice, Marrow long green Bush, Cucumber Passandra, Courgette Black Forest F1, Pumpkin Dill's Atlantic, Pumpkin Jack be Little, Cucumber La Diva, Melon Piel de Sapo, Squash Cha cha F1, Turks Turban. 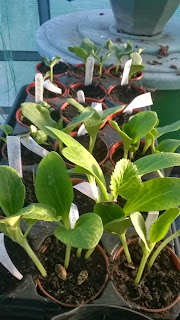 Transplanted 3 Gardeners Delight tomato plants in to a growbag in the polytunnel after spending 20 minutes de-tangling the supports from last year.
Posted by Mr Cooper at 18:39