Saturday 2nd May 2015 began well but ended in personal turmoil as our pet Standard Poodle had fallen down the stairs at home whilst I was at the allotment which has meant huge changes to our daily life in the week since. On Saturday evening we were not given much hope but over a week later and the dog is healing well and awaiting a MRI scan to see if he has suffered any permanent damage.
In the morning I planted out some Chinese Artichokes (Stachys Affinis) that I purchased at the start of the year online and had been growing them in the greenhouse since February. 4 were planted in the small veg patch that I have at home whilst the remaining 8 were planted at the allotment in the bed facing the entrance to the plot.
At the allotment I sown the following seeds in the polytunnel :
Marrow (Long Green Bush)
Squash (Turks Turban)
Pumpkin (Jack Be Little)
Squash (Cha Cha F1)
Squash (Spaghetti)
Courgette (De Nice a fruit rond)
Cucumber (Passandra F1)
Cucumber (White Wonder)
Cucumber (Burpless F1 Tasty Green)
Cucumber (Marketmore)
Pumpkin (Dill's Atlantic Giant)
Melon (Piel De Sapo)
Pumpkin (Hundredweight)
Courgette
Pickling Cucumber
Gourds
Pumpkin (Amazonka)
Marrow (Long Green Trailing)
Cucumber (La Diva)
Courgette (Black Forest F1)
Water Melon (Sugar Baby)
Sweet corn (Mini Pop F1) 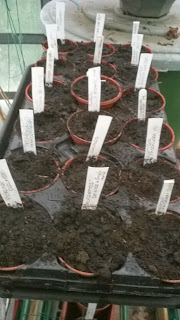 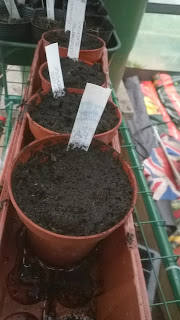 Whilst outside on the allotment Broad beans & Parsley were sown .
Good King Henry was sown in the shade of the Cardoons. 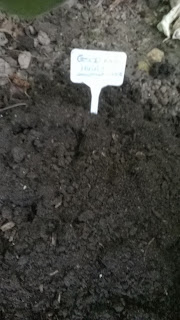