All at the allotment is far from complete and I continue to fill my head full of ideas influenced from a multitude of sources . Tasks that have been on a 'to-do' list for months are still waiting to be seen to . The shed is still as full as it was at the start of the year - a thorough clear out is long over due. Part of the cause of the shed clutter seems to be the 'one man's junk is another man's treasure' syndrome and as allotments change tenants I have been passed a few items some of which I really ought to have said no to.
I am no good at keeping diaries but thankfully I take the odd photograph on most of my visits using either a my camera or mobile phone. So today I shall just briefly update from the camera's memory :

The 5th April saw the beginnings of the edging around the path . Originally I was going to purchase decking but then that would defeat the whole austerity thing and so a solution was found in using old wooden pallets - I even managed to re-use the nails too. The woodstain however was bought on sale at £2.39 for a 5 litre tub. 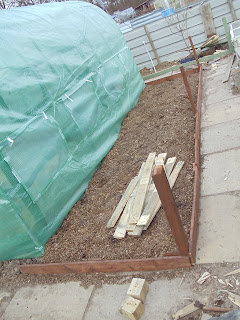 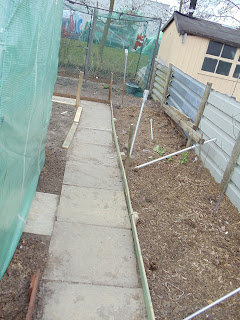 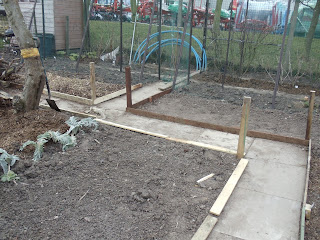 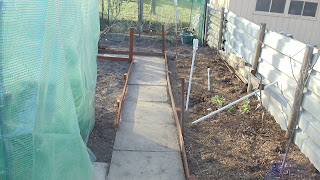 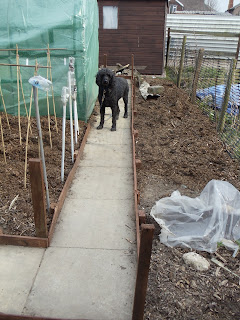 By April 9th the task was completed all the way to the entrance of the shed. 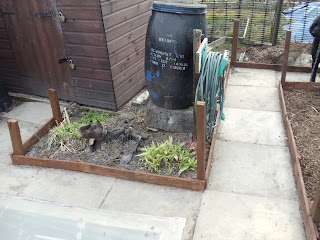 On the 10th I attached some of the orange safety fencing I had been given to the path edging . This has a dual purpose - to keep the dog from going on the plants and something to attach butterfly nets to in order to protect the crops . Sadly if the path was fenced on both sides the wheelbarrows would become too wide. 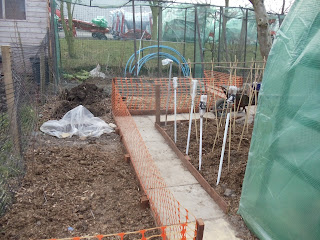 On the 12th April I finally removed the last compost heap from our backgarden and gave it a new home at the allotment . The contents were put into trenches and pits that had been dug ready for runnerbeans later on in the year. 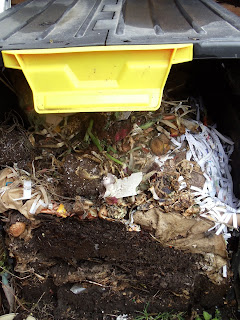 On the 17th I harvested my first lot of Rhubarb , the second lot was to be harvested on the 30th 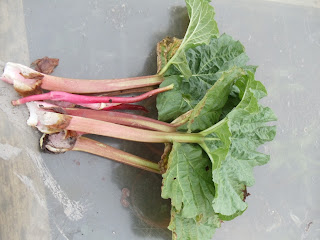